Companies are piloting the use of sidewalk robots and aerial drones to deliver goods and meals. 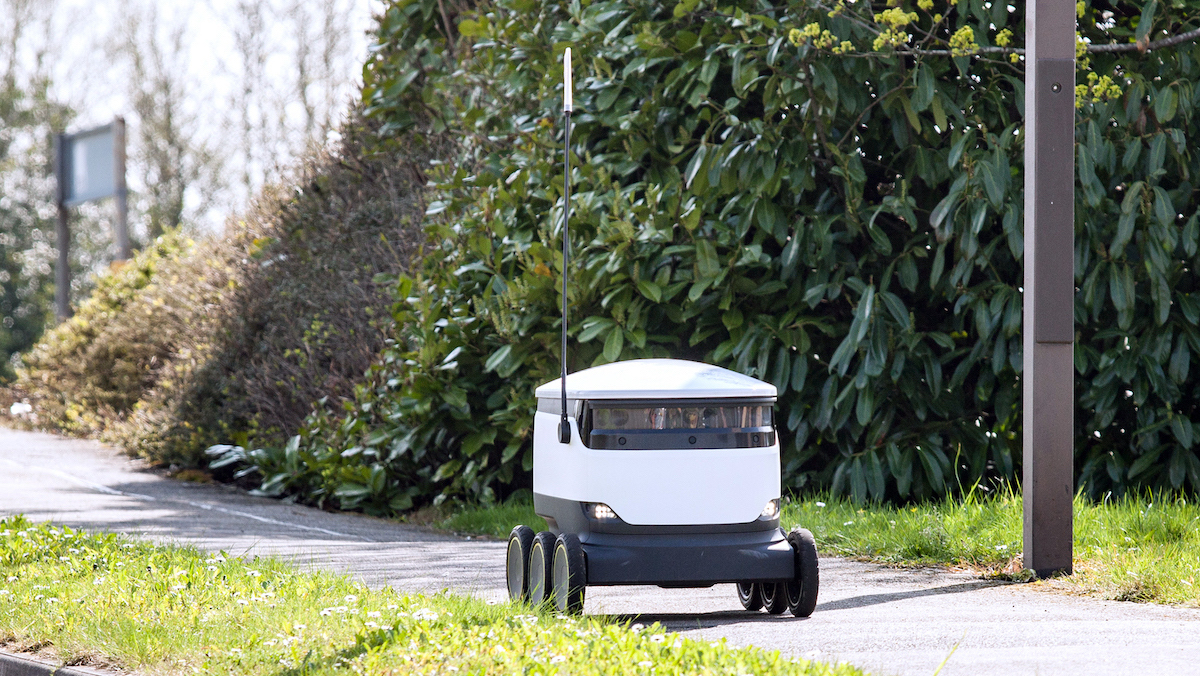 Drones are autonomous, semi-autonomous, or remote-controlled devices used for a variety of purposes, from package delivery and logistics to scientific research and military activities. Drones can be terrestrial, aerial, or even aquatic in nature, though terrestrial and aerial drones are the most common types to date. Of these, robots that can deliver packages and/or meals have had the most significant effect on urban design and form to date.

For much of their history, drones have primarily been used for military, law enforcement, and media purposes. In the last few years, however, companies such as Amazon and Google have begun developing aerial drones intended for use in both consumer package delivery and high-priority logistics and freight deliveries, such as quickly moving supplies between medical facilities. Others, such as Uber and Postmates, are developing drones that can deliver restaurant or grocery orders directly to customers. These delivery drones are being developed either through in-house research and development or through partnering with technology companies, and include both terrestrial and aerial drones. NURO has been working to perfect grocery and goods delivery with a vehicle that operates on streets, while companies like Starship Technologies and Kiwibot have focused on meal delivery with small PDDs that operate on sidewalks.

Drones and PDDs may be remote-controlled, semi-autonomous, or fully autonomous. Remote-controlled drones are the most common and oldest drone type, ranging from remote-controlled toys to aerial photography and videography drones. Some PDDs currently in operation are entirely controlled by remote operators. Semi-autonomous drones are the second most common drone type, and operate with limited remote operator input, such as when an otherwise autonomous delivery drone encounters a scenario it doesn’t understand and signals an operator to manually resolve the situation. In the case of PDDs, they may operate autonomously while on a sidewalk but a remote operator may take over when the PDD enters an intersection. Fully autonomous drones arguably don't yet exist or are in their infancy, much like the current state of AVs. 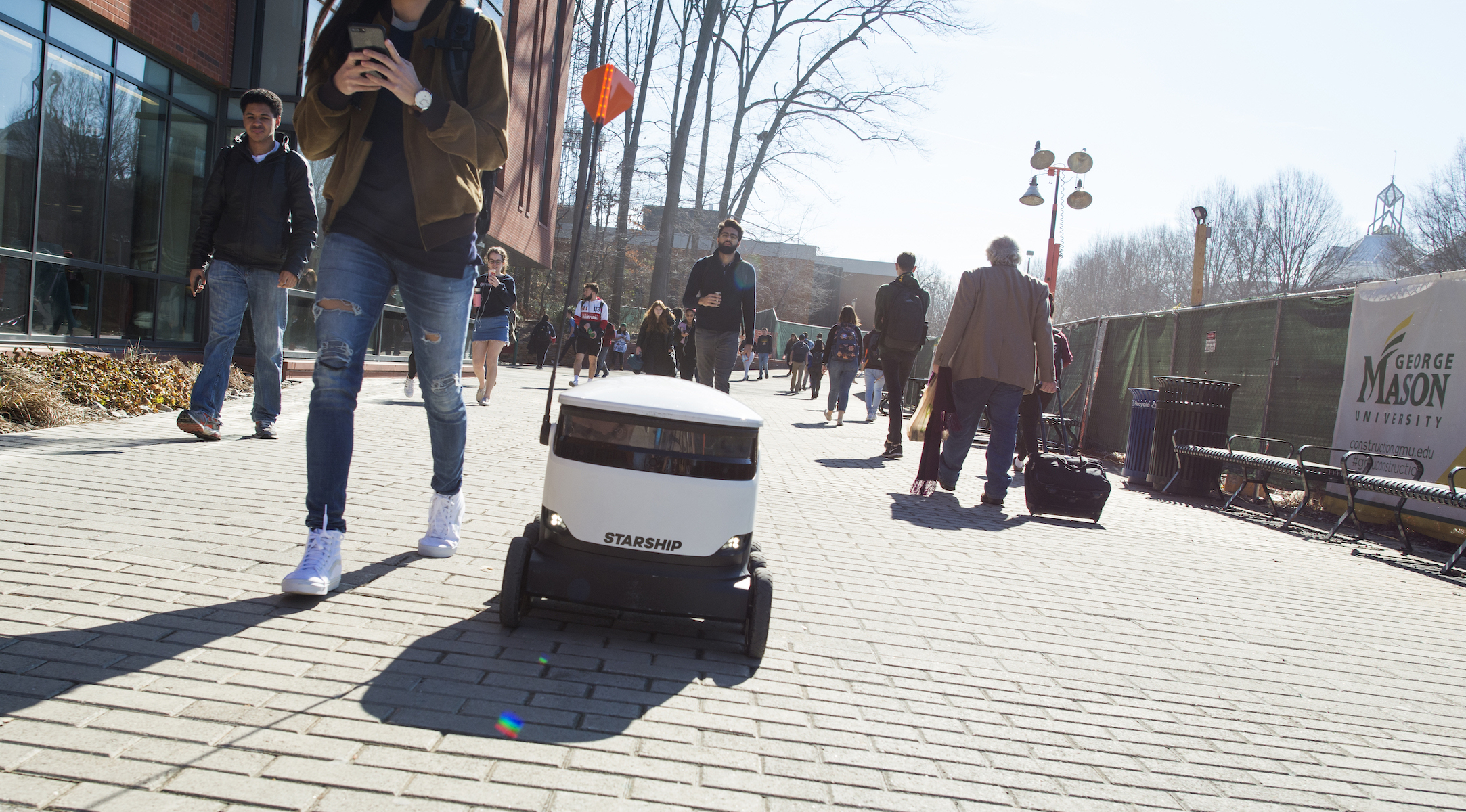 Drones can operate in less congested spaces. Aerial drones can avoid traffic congestion entirely when making deliveries, allowing for faster deliveries while also avoiding contributing to street congestion. Terrestrial drones, meanwhile, are primarily designed to operate on sidewalks and footpaths, similarly allowing them to avoid street congestion, though several operate in traffic or in the bike lane. Additionally, aerial drones in particular can be used to quickly deliver time-sensitive packages and freight to hospitals, and areas otherwise outside of conventional delivery range, such as rural communities or areas that have recently suffered a natural disaster.

Drones are much less expensive for operators compared to conventional freight and delivery services. Most drone designs are electric-powered, allowing operators to save on fuel costs, and as automation increases, personnel needs will correspondingly decrease.

Drones may  be more environmentally sustainable than conventional delivery and freight vehicles. Due largely to the fact that most drones are electric, operating these vehicles in lieu of conventional fossil fuel-based fleets may reduce greenhouse gas emission levels. However, how much of a net positive effect drones will have on emission levels overall will vary by location, as drones still must be recharged using existing power grids. 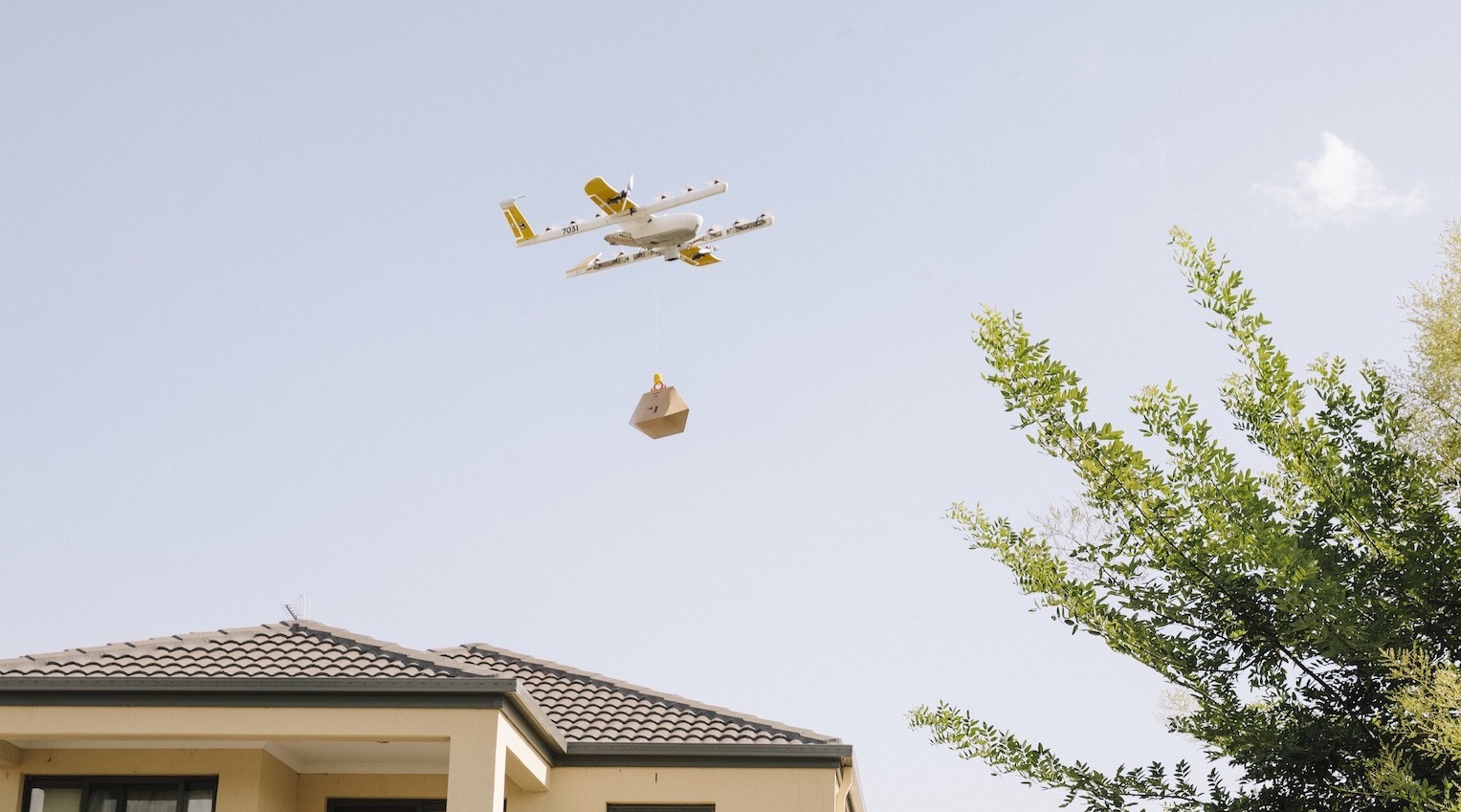 Current infrastructure may be inadequate to fully capitalize on the potential advantages offered by drones. With most drone designs currently powered by electric engines, and with current designs requiring frequent recharging, lack of charging stations could limit effective ranges. While this could potentially change with a wider adoption of electric vehicles and a subsequent increase in charging stations, current charging requirements could necessitate more small warehouses. Additionally, most residential and commercial plots are not designed to accept deliveries from drones, particularly aerial drone variants designed to land during delivery.

Drones pose significant privacy and safety concerns inherent to their operations. Drones are heavily reliant on a variety of instruments for their operation, including GPS, cameras, LiDAR, microphones, and infrared sensors. As a result, they could capture a significant amount of personal information in the course of their operations. With this data being sent to drone operators, valid concerns around privacy and how that data is used could arise. Additionally, as drones get heavier and heavier, collisions with humans becomes an increasingly dangerous possibility, as do increasingly complex interactions with other road users in the case of terrestrial drones.

Existing regulations are often insufficient for new drone usage, particularly aerial delivery drones. Current drone regulations in the United States require that drones remain within line-of-sight of the operator, with exceptions only recently being granted on a case-by-case basis. Additionally, regulations on drone payload limits and safety measure requirements are also in flux, with some of the lower payload restrictions making drone delivery untenable.

Technology and e-commerce companies such as Google, FedEx and Amazon have been heavily investing in drone technologies. While Amazon’s Prime Air project has been tangled up in regulatory and design hurdles, Wing—formerly a Google division, now a full company—has been using drones to make limited deliveries. Other, smaller technology companies, such as Starship Technologies, have also been active in drone development.

Shipping and shipping manufacturing companies are also actively participating in drone development. Airbus has been developing an urban package and limited-range freight service called Skyways, for example, and recently concluded trial runs in Singapore. UPS, meanwhile, has already deployed Flight Forward, a drone service that has been delivering medical supplies and is looking to expand into other forms of package delivery.

Transportation network companies (TNCs) and on-demand delivery services are developing both aerial and terrestrial drones. Uber, for example, is planning on using aerial drones to fulfill some of its restaurant order deliveries through its Uber Eats program, and is also planning on offering air taxi services in the future. Postmates, now owned by Uber, is working on developing a terrestrial delivery drone fleet intended to supplement its delivery network, relying on the small, compact vehicles for shorter-range deliveries in dense urban areas.

Companies are using drones for time-sensitive deliveries. While widespread commercial business-to-consumer deliveries are not yet happening, business-to-business and logistical deliveries are becoming more common. In particular, drone delivery of medical supplies to, from, or across healthcare campuses have been ongoing, both in the United States and abroad.

Companies are also beginning to use drones for deliveries in rural areas. Companies such as Zipline have been delivering medical supplies in rural African communities, and others, such as Wing, have started to offer consumer goods deliveries in rural communities within the United States. These deliveries demonstrate the potential of drones, particularly aerial drones, to overcome a lack of infrastructure that might prohibit conventional delivery services from operating in the area.

August 2014 - Google reveals they have been working on drone delivery development under the program name Project Wing (later to become its own Alphabet subsidiary).

July 2016 - The first large-scale drone delivery program in the world is launched as a partnership between San Francisco start-up Zipline and clinics and blood banks in Rwanda.

June 2018 – Nuro and Kroger join together to form the first partnership between an autonomous delivery company and a grocery store and pilot autonomous grocery delivery in Scottsdale, Arizona.

May 2019 - DHL launches an urban drone delivery program in China.

June 2019 – Amazon’s CEO of Amazon Worldwide Consumer, announces that “within months” packages ordered through Amazon Prime will begin to be delivered by drone.

March 2020 - Drone start-up Zipline begins delivering medical supplies via drone in Charlotte, NC, claiming to be the first company to aid in the pandemic.

August 2020 - Amazon receives approval from the Federal Aviation Administration to operate as a drone airline.

December 2020 - Pennsylvania joins other U.S. states in legalizing the operations of sidewalk delivery robots, allowing them to be up to 500 pounds and operating at speeds of up to 12mph.

This resource outlines the history of drones from 1907 through present day.

What opportunities exist for the spaces in and around buildings that are currently devoted to parking?