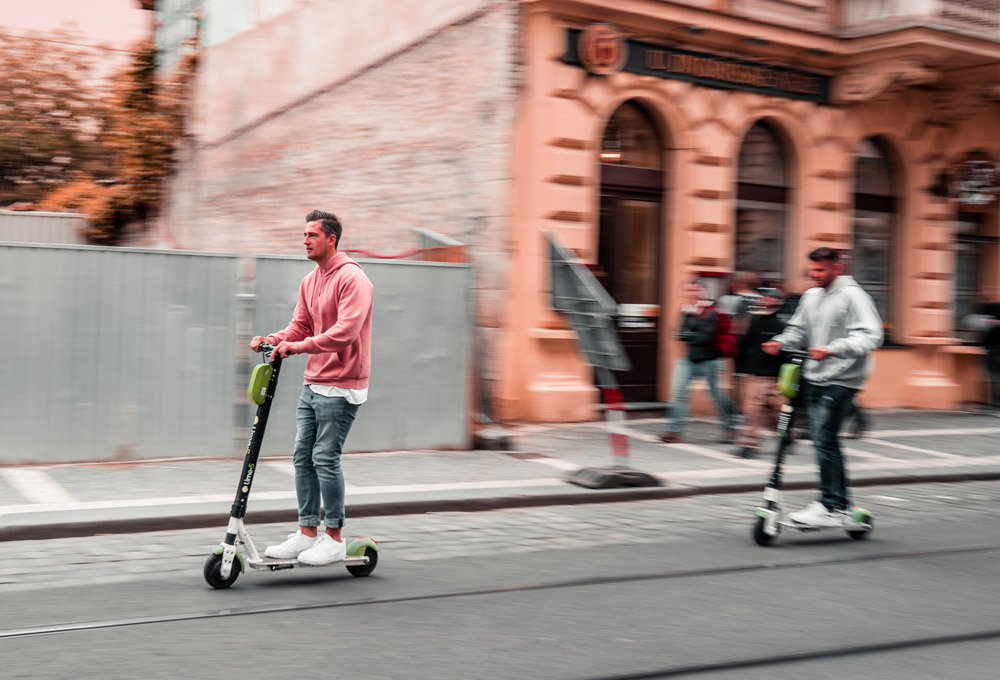 Photo by Marek Rucinski on Unsplash

Micromobility refers to bikeshare bikes, e-scooters, and e-bikes, as well as semi-motorized variants of these modes such as pedal assist and pedal-electric bikes. Micromobility vehicles can be personally owned or maintained by a city or private organization and operated on a shared, charge-per-trip basis. While the term itself is relatively new, some of the modes that make up micromobility have been operating for decades.

Read the COVID-19 Micromobility page to learn how the Covid-19 crisis disrupted the micromobility industry.

Urbanism Next released two new reports in the COVID-19 – Impacts on Cities and Suburbs series: Key Takeaways Across Multiple Sectors and Impacts to the Urbanism Next Framework that explore how the global pandemic is changing different elements of urban living including transportation, urban design, building design, e-commerce and retail, and real estate.

While scooter deployment has almost universally been motorized, bikeshare deployment started decades ago as a non-motorized model. Only since 2018 has bikeshare included motorized or ‘e-bike’ options, and e-bikes have seen strong utilization rates in areas where they have been introduced. The split between motorized and non-motorized options for micromobility has fueled a debate about how previously active modes (bikes and scooters) that produced health benefits are becoming transportation options that no longer require physical activity (e-bikes, e-scooters). 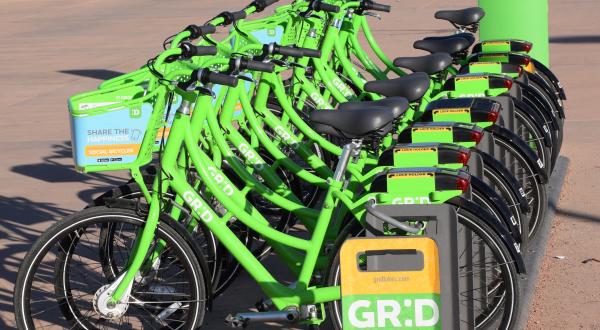 Photo by Terry Jaskiw on Unsplash

Widespread smartphone usage and ownership has made accessing micromobility modes much easier by allowing for app-based or web-based payments and vehicle unlocking. Earlier models often required more onerous unlocking and payment processes when retrieving a bikeshare bike, such as using coin-operated lock-ups or requiring that a rider call an operator and request an unlock combination code. Additionally, the introduction of widespread GPS locators allows riders to easily locate available vehicles nearby when using a dockless model.

Micromobility can fill the gaps left by other transportation modes as they provide an option for trips that are a bit too far to easily walk to but a bit too close to justify paying for a TNC or for a car’s gas and parking. Between half and two thirds of trips taken within some metropolitan regions are less than three miles (5 km) and could be made via micromobility. Similarly, micromobility modes can be used as a first/last mile connection between or to transit stops.

Unsurprisingly, bicycles and e-scooters use less energy and emit few GHG emissions per person than cars. According to NABSA, 36% of micromobility trips replace a car trip. However, 27% of e-scooter and 31% of bike trips replace walk trips, the least carbon intensive mode. 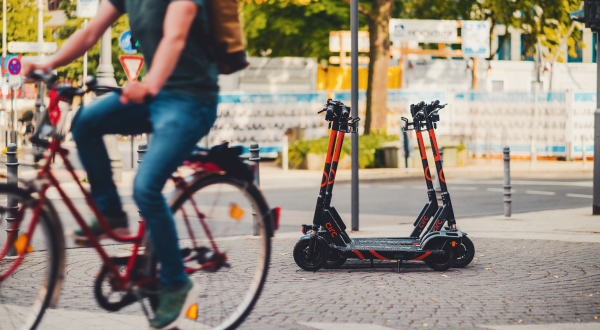 Micromobility modes often face regulatory and legal uncertainty that can make operating in a given location difficult. Skateboards, bikes, and other conventional human-powered vehicles are subject to rules and regulations that may not be easily applicable to other motorized or semi-motorized micromobility vehicles. For example, some regions categorize micromobility vehicles as toys rather than as modes of transportation, some categorize them as road-capable vehicles, some specifically outlaw them, and others still have no regulations regarding them whatsoever or are still in the process of developing them.

Micromobility vehicles compete for curb space with pedestrians, conventional vehicles, transportation network companies (TNCs), and—in the future—autonomous vehicles (AVs). Micromobility infrastructure such as docking stations, charging stations, and designated parking areas for micromobility vehicles take up already limited curbside space traditionally used by personal vehicles and pedestrians, and can make widespread micromobility deployment more expensive and/or difficult. Additionally, this competition for curb space has the potential to create safety hazards as more vehicle types have to navigate around one another.

E-scooters do not have a great safety record according to several studies that have been conducted on the topic. One study found that there have been 20 injuries for every 100,000 scooter trips taken in Austin, Texas, while another study in Portland, Oregon found that there have been 2.2 injuries per 10,000 miles travelled. These figures are substantially higher than the rates of injuries for other modes of travel such as biking and driving. It is still unclear if this high accident rate is primarily due to a lack of familiarity with vehicle use, impaired riding, a poor state of roads and paths, or something endemic to scooters.

Transportation companies and manufacturers such as Lyft and Ford operate their own micromobility fleets, either independently or in partnership with dedicated micromobility companies, governments, or other entities. In the case of Lyft, operation of these micromobility fleets is part of a vertical integration effort, and is offered alongside their other services.

Governments and other organizations are supporting micromobility deployments to realize multiple benefits. For example, many bikeshare systems are subsidized directly or supported by local governments that wanted to provide active transportation alternatives to driving a car. Additionally, organizations such as hospitals and other healthcare providers are sponsoring or operating their own fleets in a bid to promote healthier lifestyles.

People use micromobility services to complement or replace the trips they already take. Activities such as commuting to work, shopping trips, and social trips are including the use of micromobility services for some or all of the journey. In some cases, approximately half of e-scooter trips replaced automobile trips, while the rest replaced walking, biking, and transit trips. Micromobility services can also be used as a form of local transportation at the destination of another trip, allowing more flexible movement at a location without needing to make additional trips using automobiles.

People use micromobility services for first- and last-mile transportation. Using vehicles such as e-bikes and e-scooters to get to and from a transit hub or other transportation center has been becoming increasingly common in the last several years. More than 50% of bikeshare riders and 25% of e-scooter riders use these modes to get to or from transit stops. Some cities have specifically started placing micromobility vehicles at public transit stops in order to encourage this behavior.

People use micromobility services are for health and recreational purposes. This can complement other uses as well. For example, human-powered micromobility vehicles such as bikeshare bikes can provide physical exercise in addition to transportation. Meanwhile, e-scooters and other similar vehicles can be used as a more entertaining mode of transportation than other alternatives when commuting or visiting locations recreationally, such as with tourism.

Summer 1965 – Luud Schimmelpennink, a political activist in Amsterdam, the Netherlands, organizes an effort to collect hundreds of bicycles, paint them white, and scatter them across the city for people to use for free. This is widely considered the first bike share program.

1996 – A bikeshare system launches at the University of Portsmouth in England that requires users to scan a magnetic card and  enables  users to be charged extra for not returning their bicycle on time.

2008 – The first bikeshare pilot opens in the United States in Washington, D.C with 120 bicycles and 10 stations throughout the city.

December 2017 – According to NACTO, over 35 million trips were taken on bikeshare systems in 2017, and the number of bikeshare bicycles also doubled from the beginning to the end of the year.

2017 – 35 million trips are taken on shared micromobility devices in this year.

September 2018 – The first known fatality involving a shared e-scooter occurs when a rider in Dallas, Texas falls and sustains blunt force injuries to the head. .

2018 – In 2018, roughly 84 million trips are taken on shared micromobility devices, more than double the number completed in 2017. 38.5 million of these trips on e-scooters and the rest on docked and dockless bikeshare systems.

June 2019 – The mayor of Nashville, Tennessee announces that the city’s e-scooter pilot will end early  after an e-scooter rider is struck and killed by a motorist.

June 2019 – Less than a year after e-scooter companies launched in Paris, France it is estimated that the city is home to over 20,000 scooters.

2020 - Across North America, 14% of bikeshare services and 57% of e-scooter services were suspended because of the pandemic. By the end of the year, 75% of the suspended services had reopened.

This is a fact sheet suitable for use as a printed handout on Urbanism Next's topline research findings regarding micromobility.

Bikeshare bikes and e-scooters are becoming new fixtures of transportation. How will micromobility interact with other transportation forms?

Will new mobility strengthen current transit nodes/corridors? Or will it lead to more dispersal with low-density development?