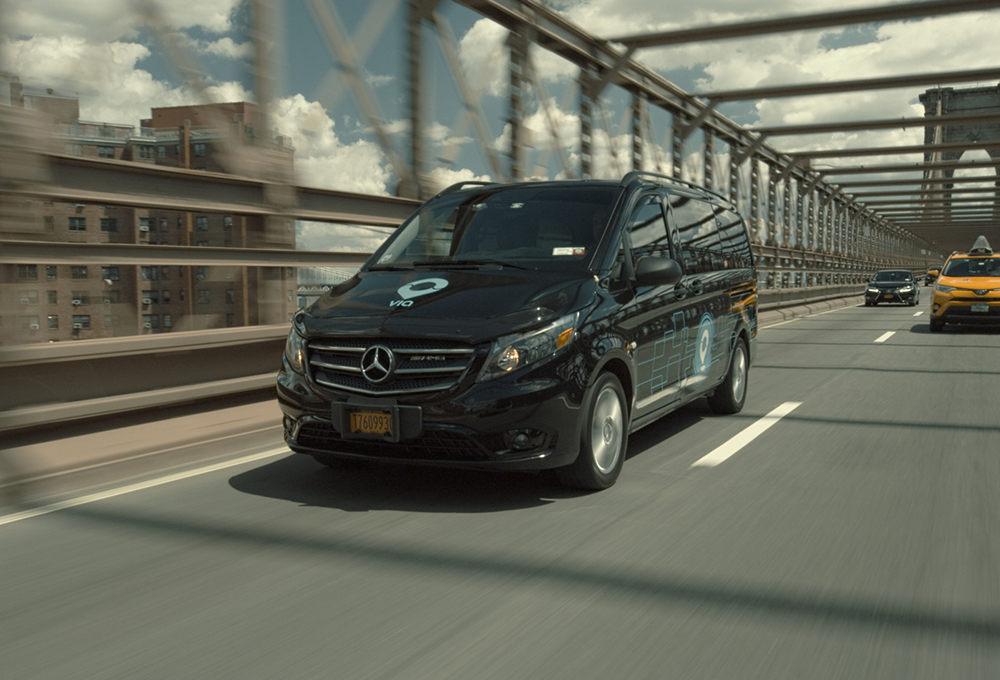 Photo by Andy Ambrosius via Via. Used with permission.

Microtransit is a relatively new addition to mobility as a service (MaaS) and shared mobility fields. In contrast to conventional transit, microtransit is usually operated on an on-demand basis along fixed or flexible routes, and relies on smartphone apps or other technology platforms for ride requests and routing details. Microtransit fleets, as a general rule, are smaller than those used by public transit--typically consisting of shuttles or minibuses rather than full-sized buses. These vehicles can feature amenities not typically found on public transit vehicles, including USB charging ports and wireless internet access. Additionally, unlike public transit, most microtransit service operators are private companies, including Via and Transloc. In some cases, private companies provide the on-demand platform and software that is then installed on public transportation vehicles, such as for Marin Transit Connect.

Microtransit can either be oriented around either public or private ridership. In public ridership models, microtransit companies provide short-range transit for individuals or groups who request service through an app or related technology platform. Conversely, private microtransit is typically set up by an organization to provide transportation for employees either travelling and from a workplace or between two workplaces, often through a fixed route or schedule. Examples of the former include Via and Transloc, while examples of the latter include the employee shuttle programs operated by companies such as Google and Apple. 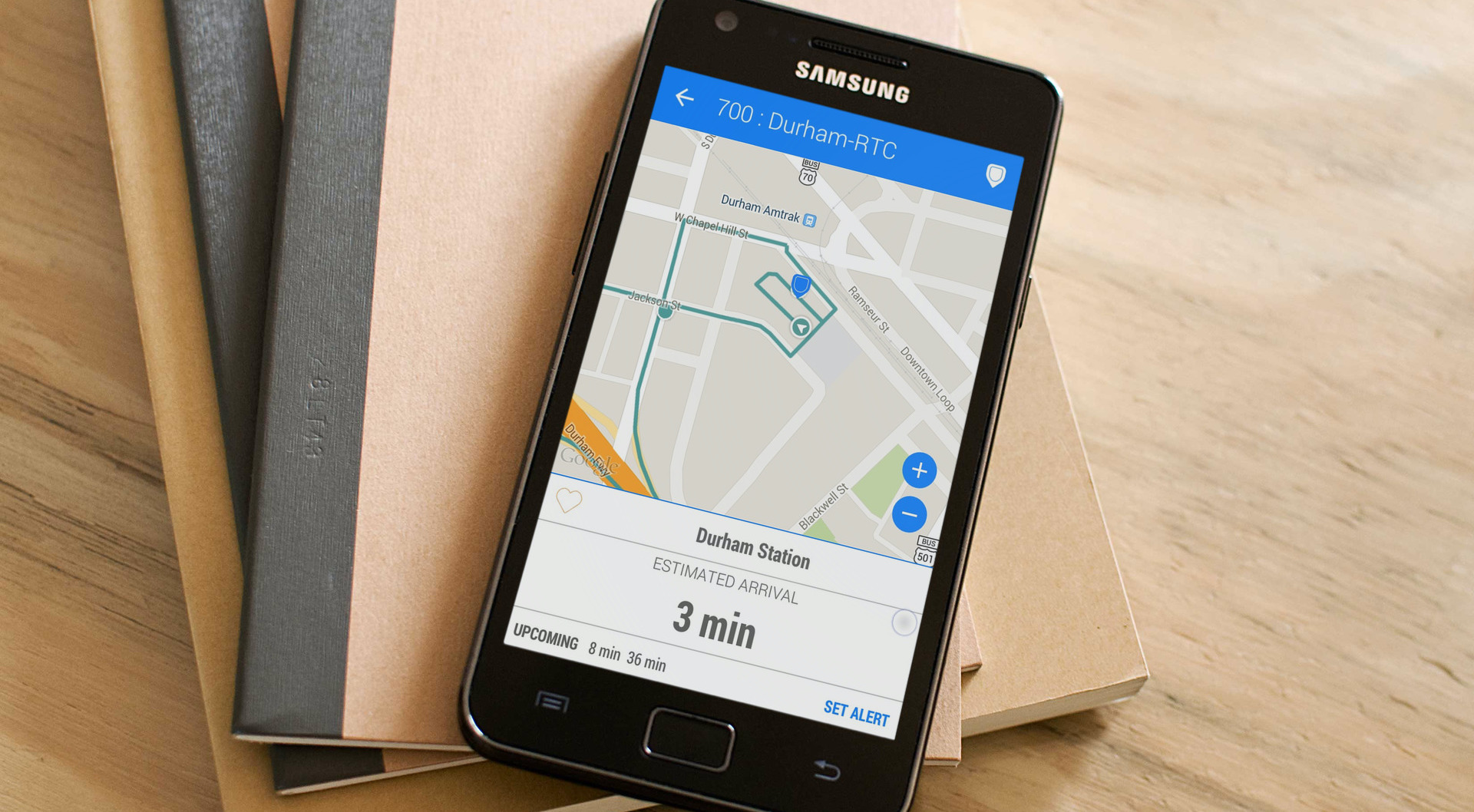 Photo by TransLoc via TransLoc Media

Widespread internet-capable device usage has been a key element in the growth of microtransit services. Where conventional shuttle services typically require calling a dispatcher to request a ride, microtransit operators enable riders to request and pay for service through their smartphones, tablets, or other mobile devices. In addition to being more convenient, this app-based approach also allows microtransit operators to match requests to routes and available vehicles in real time.

Microtransit can be more convenient than other transportation modes. This is often a major driver behind private microtransit usage, where using company-provided microtransit instead of driving or using public transit can be faster or more pleasant. This is particularly true for companies that operate microtransit services in cities such as San Francisco, where commute times can be long and the amenities offered by a company shuttle can allow riders to work en route. 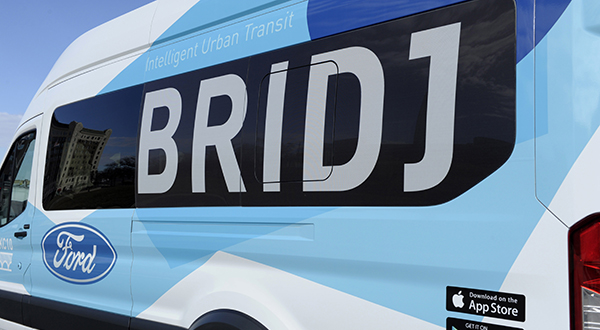 Photo by Ford via Ford Media. Used with permission.

Microtransit has not demonstrated long-term financial feasibility since its inception, with once major operators such as Bridj and Chariot closing down entirely. A significant financial hurdle comes from the very nature of the service itself—microtransit is in part designed around on-demand transportation, and there is no guarantee that any given trip will acquire enough riders to cover expenses. In addition, high capital costs, low demand, and lack of differentiation with public transit continues to be a barrier to financial viability, according to a study by Feigon, Murphy, and McAdams. In many cases, microtransit trips are significantly more expensive to operate than conventional public transit trips, and without being heavily subsidized, microtransit services often struggle to remain financially solvent.

Microtransit can add to traffic congestion by putting more vehicles on the road if they are pulling people off of existing transit services. This may not be a significant issue in situations where microtransit complements public transit. However, when operating independently microtransit is competing for curb space and lane space with public transit, personal vehicles, transportation network companies (TNCs), and other traffic types. In cases where microtransit overlap with public transit routes, the number of vehicles on the road is at least double what it would be if only one route or the other existed.

Public-oriented microtransit companies such as Via, Bridj, and Chariot are some of the most visible examples of microtransit. However, the last few years have not been kind to them. Of the three, only Via is continuing to operate at full capacity, while Bridj has declared bankruptcy and now only provides service in select Australian cities, and Chariot ceased all operations in March 2020.

People use microtransit for convenience. Microtransit vehicles are often more amenities-rich than those used by public transit, and the smaller, on-demand nature of the service often means that microtransit is the faster and more pleasant option. This is particularly true of internal microtransit or elite-focused microtransit services, thought the latter has not had much success, with examples such as San Francisco’s Leap Transit shutting down within months of launching.

1914 - The jitney, the first precursor to microtransit, first appears in Los Angeles when individuals began providing bus-like service during a streetcar strike.

October 2012 - Kutsuplus launches in Helsinki, Finland, and is considered the first modern-day microtransit offering in the world.

June 2014 - Bridj begins providing rides in the Greater Boston Area, making it the first company to offer microtransit service in the United States.

August 2015 - TransLoc makes their OnDemand software available to transit agencies, introducing the “agency-owned” model of microtransit to the United States.

March 2016 - The Kansas City Area Transportation Authority (KCATA) and Bridj begin a six-month pilot project, the first in the United States. The Transportation Sustainability Research Center (TSRC) at the University of California conducted an analysis for the pilot, and can be found here.

April 2017 - The CEO of Bridj, a microtransit company at the time operating in Boston, Washington DC, and Kansas City, announces the company will cease all operations.

January 2018 - In Texas, the City of Arlington becomes the first US city to use microtransit as the sole public transportation service.

January 2019 - Chariot, the microtransit company acquired by Ford in late 2016, reveals that they will stop operating and will lay off 625 employees throughout the United States.

July 2019 - Via starts to test the use of autonomous vehicles for microtransit in a retirement village in New South Wales, Australia.

In the United States, public transportation agencies are experimenting with on-demand, shared, and dynamic models to augment traditional fixed-route bus and train services. These services—referred to as microtransit— are enabled by technology similar to the mobile smartphone applications pioneered by privately operated transportation network companies. As interest in this technology grows, it is critical for public transportation agencies and departments of transportation to understand the benefits and challenges of incorporating components of these innovations into publicly funded services. This research is informed by limited literature to date as well as a series of interviews with the project teams working on the pilots. It concludes with a set of recommendations intended to inform the design and implementation of future public microtransit pilots and service delivery models.

This book provides a complete overview of microtransit, siting research publications, surveys, and case studies from current pilot programs happening throughout the country.

"This research explored how these new options could be synergistic with public transit models and detailed the experiences of two transit operators that entered into service delivery partnerships with a transportation network company and a micro- transit operator. Based on a series of interviews and the experiences of these two public agencies, this research provides a set of key takeaways and recommendations for transit operators exploring the potential of partnering with new mobility services such as transportation network companies (e.g., Uber or Lyft) and microtransit (e.g., Bridj or Via)."

In partnership with Via, Marin County Transit District (Marin Transit) launched a microtransit pilot program in May 2018. This report created by Marin Transit contains lots of insights into the design and outcome of the pilot project. In particular, the survey results and data analysis in the report is very colorful.

Will new mobility support transit to strengthen current nodes / corridors? Or will it lead to more dispersal with continuous low-density development?

When proximity to workplaces or goods and services is no longer necessary, what happens to already sprawling urban footprints?